So, you buy Mitt Romney’s argument that Obama has messed up the economy?  Made it worse?  By what measure do you come to that conclusion?  Yes, employment is still around 8% and it SEEMS like we’re still in a recession.  But the fact is that the economy is actually growing.  No, not as fast as we’d like it to, but growing nonetheless.  Of course, if you look at the actual data, the top 1% is getting almost all the benefit of this growth while the rest of us just get by.

Now, Republicans and their presumptive nominee want to institute programs of severe austerity, cutting government, laying off workers and lowering taxes on the wealthy.  They say that such measures will stimulate growth and create jobs, but will it actually?  Well, George W. Bush tried half of that (lowering taxes while increasing government spending and employment) and we see where that got us.  And, if you look at Europe, they’re actually trying the OTHER half (laying off government employees and slashing spending) and THAT’S not working either.

Now note the graph below.  The blue line shows GDP growth for the Euro zone – those countries that use the Euro as their currency – and the red line does the same for the UK – which still uses the pound.  Neither of these economies has matched U.S. economic growth (yellow line) since Obama took office. 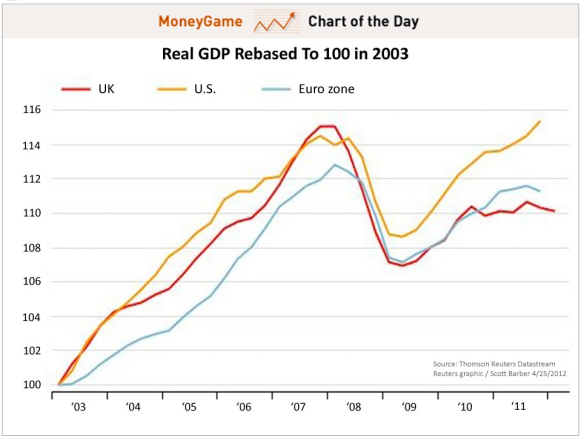 Now, look at the UK line in particular.  Following the onset of the Great Recession (2008-2009), its economic recovery was seemingly underway … until about 2010.  What happened then?  Why the current conservative government of David Cameron took office and began a program of severe austerity, slashing programs and laying off hundreds of thousands of government employees.  Since then, their economy has faltered, actually CONTRACTING for the last two quarters, which – by textbook definition – means that Cameron’s conservative policies have RETURNED Britain to an economic condition of recession.

So, you’re saying you might actually be considering voting for the proponents of policies that not only almost led to worldwide Economic Armageddon in 2001-2008 but also aren’t working now in Europe?  How many times do you have to touch the hot stove before you finally learn that doing so will burn the absolute SHIT out of you?